Cave Diving for Fossils in Far Away Madagascar 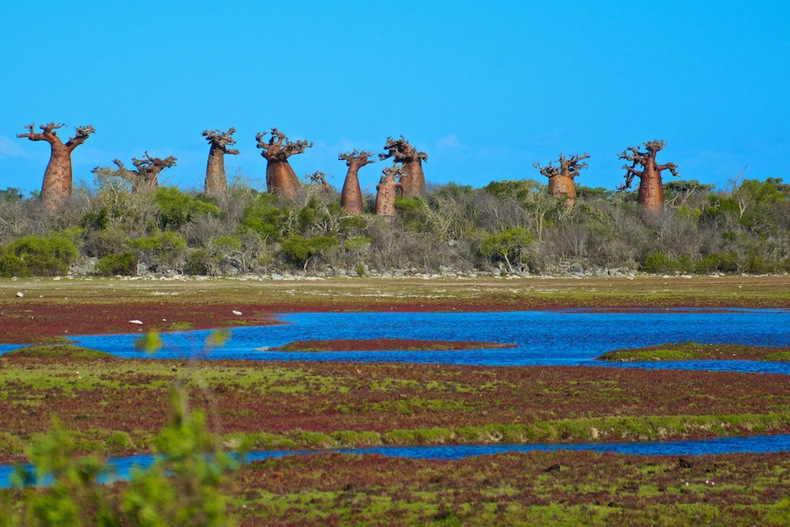 Madagascar has never been a bright spot on my research radar screen. A menagerie of platyrrhines and tarsiers and a garden of phylogenetic trees keep me pretty busy. But my dutiful sense of the possible changed, unwittingly, during five years of working with my scuba diving team to collect subfossils in the Dominican Republic. 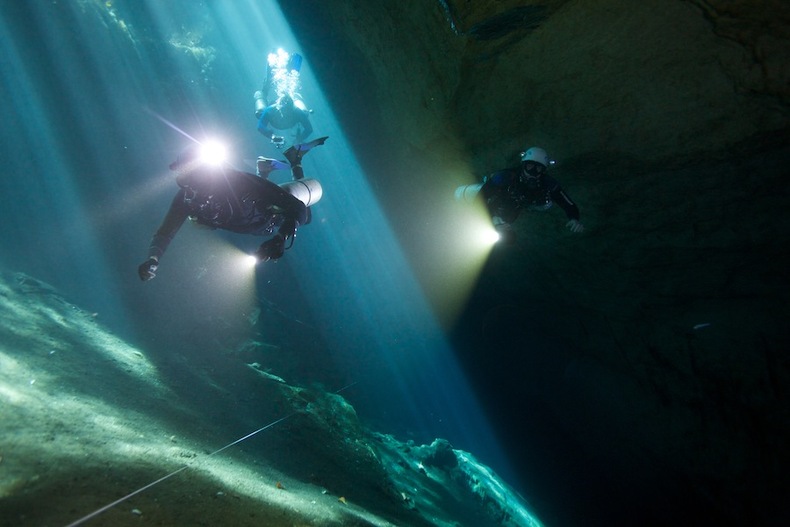 These divers are first and foremost underwater explorers and pioneers, which means they have absolutely no geographic or biotic preferences or prejudices. They are pursuing fabulous submerged freshwater caves that no one, anywhere in the world, has ever seen before. Their experience in the DR has only heightened the urge. The allure of finding fossils, another way of being the first, has added a new high to feeling the mystery and grandeur of decorated caves, blind cul-de-sacs, vaulted cathedral ceilings, columnar stalagmites and stalactites, soda straws of calcite, and draped limestone walls. Even the ugly ones that are nothing but craggy, shapeless, boulder-strewn inglorious hollows might yield a bit of bone or tooth treasure. So when my friend, diver extraordinaire Phillip Lehman, surprised me in an email saying he would be off the grid in Madagascar for three weeks, I replied simply, but not without urgency: “Call me now, please.” That was 12 months ago. Much has happened since, but let’s start at the beginning.

A tip from another cave diver, Ryan Dart, sent Phillip alone on a reconnaissance mission to meet said Mr. Dart at Madagascar’s Tsimanampesotse National Park. (And now for a digression, a taxonomy/phylogeny quiz. Based on probing early morning interviews conducted while careening down a roadless highway atop the sand dunes of southwest Madagascar, I learned: Ryan is Australian; there may be only 200 surnamed Darts down under; he has decamped to a southern African country with a non-Australian wife; he likes caves; he is fixated on fossils; he is good with a chisel; his first name bears the initial R, is shaped by two syllables and shares four of the same letters as another fellow named Dart; he is slight of build; he admits his grandfather exhibits an interesting phenetic resemblance to this man. What conclusions regarding Ryan’s ancestry might you divine from this data? )

A few days later Phillip began calling my cell, oblivious to time zones, to confirm our hopes and expectations: there truly is a giant subfossil lemur graveyard in Aven Cave. Pictures soon followed. This was too good, too important not to pursue. Platyrrhines will have to make room yet again for a bunch of Old World primates. 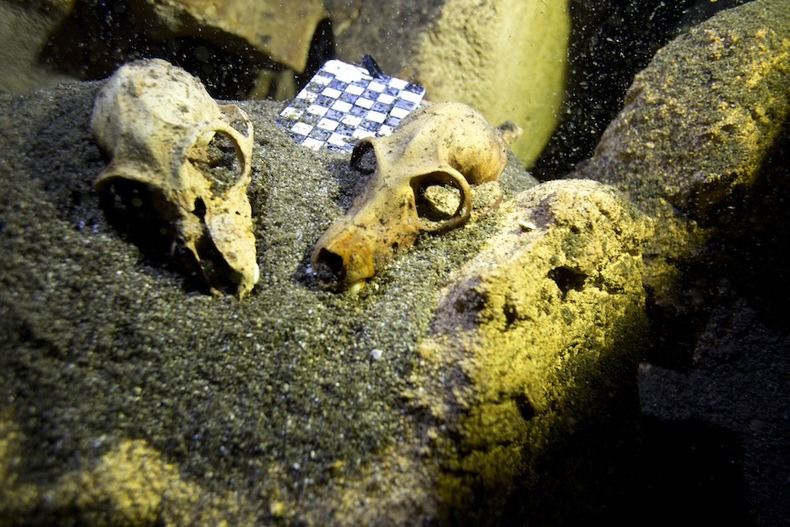 Rather quickly, leaning on a newly assembled expert science team consisting of Laurie Godfrey, Kathleen Muldoon and Gregg Gunnell, we managed to obtain funding on short notice from the National Science Foundation and the National Geographic Society while Phillip gathered his closest comrades for an expedition he knew would be irresistible. Ryan and Phillip began organizing the logistics to support a team of eight divers planning to survey three caves over three weeks in a remote, parched section of a very challenging country. The technical needs were formidable: transporting 40 scuba tanks from the United States; convincing a manufacturer to build underwater lamps far brighter than usual (read on to see why); arranging access to a compressor to refill tanks at will; hiring four off-road vehicles and drivers to haul heaps of equipment and people; locating a local fuel reservoir we could tap when needed; securing a machine shop with supplies and tools enabling us to fix the inevitable equipment breakdowns. On the people side of things, we needed a place to eat healthy and sleep close enough to the park (i.e., 1.5 hours each way per day), with a modicum of web connectivity and enough of a fun quotient to keep everyone (ultimately N=14) sane, plus, conditions permitting the team to have restful off-diving days (translation: surfing days) to relieve tiredness or bad stomachs and to allow their bodies to safely “off-gas” the nitrogen that builds up in a diver’s tissue (as explained to me by newly minted NYCEP cave diver Zachary Klukkert).

En route, no one would be deterred by temporarily losing luggage and gear, or the Air France strike that stranded seven in Paris. Find another way, another airline. Fly back to London; get to Antananarivo after overnighting in Johannesburg; another flight the next morning to Tulear; then across the bay by speedboat to our basecamp lodge in Anakao, which was made affordable to a crew travelling on the federal dime only through the generosity of its owner. No matter that it took five days for Pietro to get there from Chile. How often did he have the chance to work with Phillip (an American, living in the DR), or Vika (Russian/ DR), or Mauro (Italian/ Mexico), or Kim (Swede/Mexico), or Patrick (Austrian/ Mexico), or Fabio (El Salvadoran/Washington, DC), or Hans (American/ New Jersey), or Ryan? Subaquatic, subterranean splendor, adventure and fossils were a certainty. 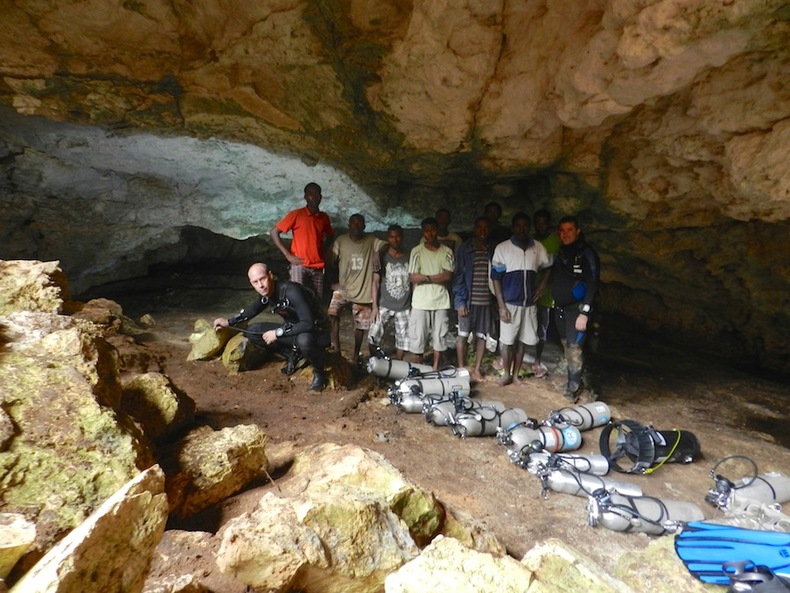 While we had good reason to think Aven was rich in fossils, the other two caves revealed their own wonders now for the first time. Malaza Manga is a colossal cave so large that our ultra-bright lamps faded into the blackness long before finding bottom; so large we had to bring four aqua scooters to help swim it; so large that highly specialized rebreathers (which recycles a diver’s own breadth by pulling out the carbon dioxide) would have to substitute for the paired scuba tanks our people normally use when we return to do the exceptionally long dives needed find out where Malaza Manga actually ends. Our survey did little more than sketch out how large it may be – as if that wasn’t enough. Inside, it’s a long swim down from average depth to the cave floor. It’s also time (and oxygen!) consuming to lay the safety line, always the first task in a new cave, and do the filming. And, it’s ponderous to repel in and out of the cave mouth lugging gear. So the Megaladapis specimen we left behind will have to wait. That cranium is resting amidst a pile of bones that may well be one and the same individual. There was no time to scour the floor for anything else.

The third cave, Mitoho, promises to reveal what the extinct carnivorous Giant Fossa, Cryptoprocta spelea, was eating. There are four skulls in there, two skeletons practically on top of one another, and a pile of smaller, non-fossa bones nearby. The discards of a feast fed in a lair?

Our modest pilot project proved that Aven Cave, the underwater marvel that drew us to Madagascar, is as advertised. In the years ahead, we will try to answer how, when, and why it filled with a huge cache of superbly preserved skulls and skeletons representing a great variety of extinct Malagasy animals, including an awesome sample of subfossil lemurs, giant elephant birds, pygmy hippo, extinct crocodile, tortoise, birds, small mammals, etc. 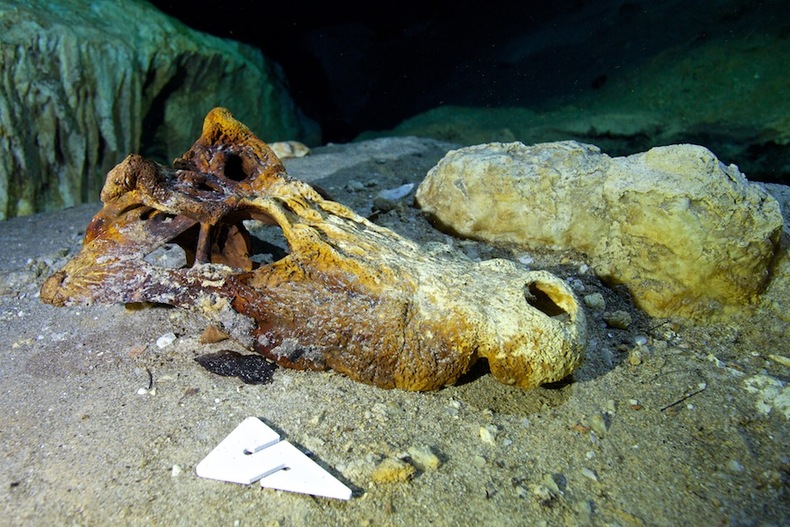 How can we best protect this natural museum of Tsimanampesotse’s prehistory, patrimony of the Malagasy people and a scientific resource to plumb for decades? Learning how and when the old, wetter Tsimanampesotse forest transformed into today’s spiny thicket is a critical issue. And how to leverage the fascination so many people have for fossils, for lemurs, for seeing what those almost unreachable caves look like, and for vicariously experiencing them through the beautiful videos produced by Phillip and Pietro – how to marshal that attention and emotion to further the conservation agenda, help educate the public and improve the lives of people living near Tsimanampesotse is a challenge and responsibility we all embrace.

There’s lots of work to do. Many hearts and minds will be needed.

If only that suddenly glowing spot on my radar screen would stop flashing, I could get back to my platyrrhines and tarsiers and trees… 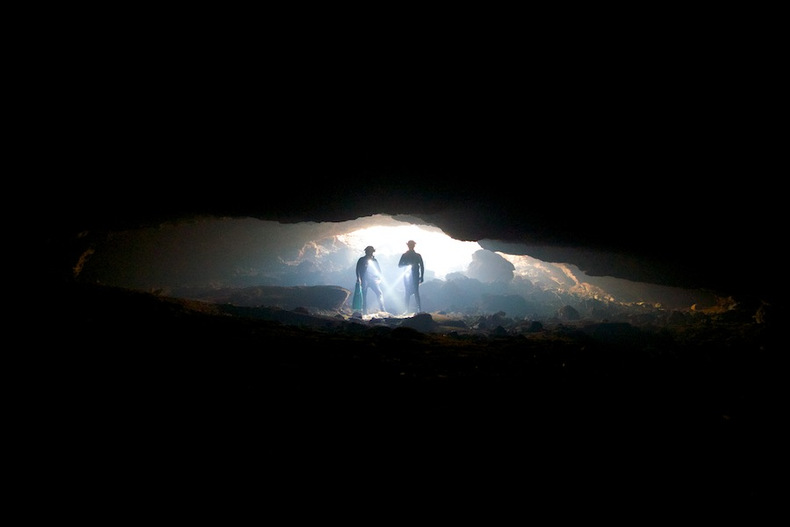 Alfred L. Rosenberger is Professor of Anthropology and Archaeology at Brooklyn College and a NYCEP faculty member specializing in the systematics and evolution of New World monkeys, tarsiers, anthropoid origins, and Madagascar subfossil lemurs.