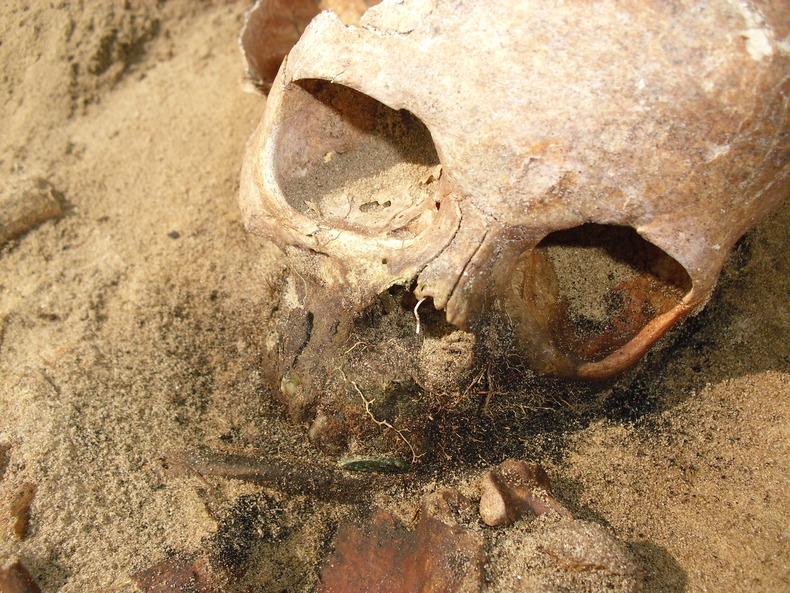 Staring on the subway is simply not polite. I learned this lesson the hard way many times over after first moving to NYC from small-town Pennsylvanian suburbia. Even though I know the rules now, I still occasionally transgress—particularly when I see an amazing pair of eyebrows. I’m not talking about the ubiquitous brow liner fashionable New Yorkers draw on and show off daily (without ever seeming to smear, inexplicably). I’m talking about the large, prominent eyebrows people have, usually men, whose photographs are passed around on the Internet with claims that they must be Neanderthals because LOOK AT THESE BROWS!

While many of us think of brows as consisting of solely hair, the big brows that cause certain Ph.D. students to impolitely double-take are prominent because of the bone underneath. Bony eyebrows are just one of the many traits that differ in size and shape between males and females. Even after dissertating on this and related topics all day, I’m still excited and intrigued by the diversity in bony skull form that can differ substantially between males and females—as well as groups of people differing in ancestral background and age.

I study levels of sexual dimorphism (SD)—or how much males and females differ in shape and size—in modern human skulls, one of the most SD regions of the human skeleton. Human sexual dimorphism (HSD) is interesting because while many primate species show substantial differences in male and female form, humans show a considerable degree of overlap. This means that distinguishing male and female form isn’t always easy, but being able to do so accurately is important for many anthropologists.

Sex is often the first biological “unknown,” or variable, that’s estimated for skeletal material since one’s sex designation affects how other variables are estimated – such as the individual’s age, ancestry, or stature. Incorrectly estimating sex of the skeleton can result in inaccurate assessments of these other things we might like to know about the individual.

When working with human populations that died hundreds or thousands of years ago, inaccurately estimating sex might distort how we interpret a population’s demographic structure, divisions of labor, or sociocultural behaviors performed by one sex that might affect the skeleton. Paleoanthropologists that study early human fossils or our older hominin ancestors may even use current HSD levels to infer whether a fossil was male or female in life, the amount of SD present in various hominin species, and even life history variables of these hominins based on inferred SD levels (like mating systems and social behavior). Without a good understanding of how much males and females differ today, we may confound not only how we interpret members of our own species, but our fossil ancestors as well! Perhaps I’m just ever-so-slightly biased (ahem), but accurately characterizing HSD is relevant and necessary for many kinds of anthropological studies.

Estimating sex in skeletons is important, but it’s also complicated. As previously stated, there’s a lot of overlap between male and female humans. Male skeletons typically have more “robust” (i.e., large, thick, rough) features than female skeletons, which are more “gracile” (i.e., small, delicate, smooth). Add to this the fact that different populations of humans vary not only in their HSD levels compared to one another, but also in how robust or gracile those populations are based on their ancestry. One can pick up a skull and say, “It’s robust! It must be a male!” but it could actually be a female from a robust population (where males are even a little more robust than the females, on average). Interestingly, such ancestral differences observed in adult skeletons may also hold for subadults, or children spanning newborns through puberty! There’s a lot to disentangle between sex and ancestry.

Age is another variable that affects SD traits in the human skeleton. Most HSD studies have analyzed adults aged 21 – 55 years old; this is because individuals younger than this are still actively growing (so the most SD skeletal regions are likely not fully developed), and individuals older than this may be undergoing degenerative changes (which modify SD regions of the skeleton). While subadults have long been considered substantially less sexually dimorphic than adults (and thus, notoriously difficult to infer sex for), a recent study shows that HSD levels may actually be substantial for some age ranges in childhood, but not others. In other words, HSD may be differential through the growth period and we haven’t been able to detect this before without using large sample sizes (a problem since subadult specimens are rare in collections) and/or sensitive 3D geometric morphometric methods, which this study uses. Within adults, we know there are differences between young and old age individuals. In the skull, the forehead region continues to expand with age and – in large part, due to changes in hormone levels – features of the face become more robust. For this reason, old age females have sometimes been misidentified as young males in forensic cases when age wasn’t accounted for! Most studies use mixed-age adult samples with unequal amounts of young vs. old age adults, making it difficult to investigate if, and how much, SD traits differ between young and old age adults. There’s a lot to disentangle between sex and age.

In my dissertation research, I’m studying how both ancestry and age affect SD traits in the modern human skull. I’ll be analyzing the four most SD skull regions – the supraorbital torus (eyebrow region), mental eminence (chin), mastoid process (protuberance directly behind the ears), and nuchal torus (protuberance right above the neck). To do this, I’ll be using 3D geometric morphometric methods, where I will place and compare 3D landmarks – or points with x, y, and z coordinates – on each of the four regions and analyze slight differences in landmark locations among human groups of differing sex, ancestry (European or African), and ancestry (subadult, young adult, old adult).

I spent approximately nine months in the field collecting 3D laser scans for nearly 500 specimens, where “the field” consisted of comparatively cushy museum collections and hotel rooms I got to return to at the end of the day. (This is in contrast to many of my colleagues, for whom “the field” consists of grassy savannahs where hyenas and lions live that you hope to avoid, or lush rainforests filled with poisonous beasties for which you don’t have any anti-serum. “Just don’t get bitten,” I heard they’re told. Respectfully, NO THANKS.) Instead, I spent time in such exotic locations as Cleveland (OH) and Washington, D.C., and also collected international samples from Johannesburg (South Africa), Paris (France), Coimbra (Portugal), Dundee (Scotland), and Bologna (Italy). While I’m still processing and editing my laser scans, I’ll soon be moving onto analysis and, in a few months, dissertating properly.

Next time you’re in public, take a look around and (discreetly) observe the variation that exists in the size and shape of human bony traits, like our eyebrows. It’s pretty amazing, huh? I’m looking forward to more accurately characterizing this variation with my dissertation research.

Claudia Astorino is a Ph.D. candidate at CUNY/NYCEP studying ranges of sexual dimorphism in the modern human skull