An interview with Will Harcourt-Smith 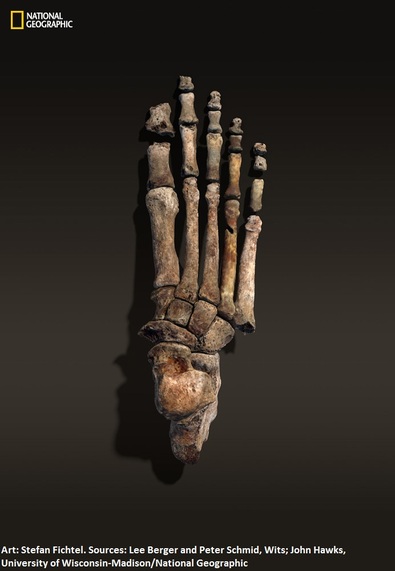 I sat down with my departmental colleague Will Harcourt-Smith yesterday to talk about his work on the foot of Homo naledi, which is out today in Nature Communications. Homo naledi is also the subject of the cover article of the October issue of National Geographic. His responses to my questions follow, condensed and edited for clarity.

How did you get involved in the description and analysis of the Homo naledi material?

I got involved, amazingly, through Facebook. I’d known about Rising Star for a while; the expedition had been publicized online; and most of us knew that there was a lot of material being uncovered. Then the South Africans put out an advertisement on social media for experts near the start of their career to apply to study the material. I thought that, although I was in a tenure-track position, that I just qualified as someone reasonably early career, so I fired off my application and then at the AAPA meetings in Calgary [2014], I heard that I’d been accepted to come down and work on the foot group, and that was very exciting.

When did you first see the Homo naledi fossil collection and what were your first impressions?

My first impression was so many fossils. I was blown away by the sheer quantity and variety of fossil elements. It seemed that a lot of the skeleton was preserved. As you well know, fossil material is often quite poorly preserved in the record, so that was very exciting. More specifically, for what I work on, there were well over a hundred foot bones, including a fairly complete foot, and we have very little of that elsewhere in the fossil record. I realized that we could get a lot of very nice analyses and nice work done on the foot, so that was super exciting.

How does the H. naledi foot compare to other South African specimens like Little Foot or Australopithecus sediba?

Generally, it is more derived and human-like than either Little Foot or A. sediba. With Little Foot, we do have quite a few foot bones, and overall the H. naledi foot is more advanced in the ankle joint and more advanced in how we reconstruct their locomotor behavior. We don’t know exactly what species Little Foot was, but it seems to have had a weight transfer mechanism from the leg down to the foot that was more primitive and ape-like. H. naledi definitively did not have that. A. sediba only has a few foot bones and, from what we can tell, its calcaneus was primitive in some respects and advanced in other respects, but the pattern of morphologies that we see in A. sediba is definitely different to that of H. naledi and more primitive. H. naledi is distinct and different from both of them, which certainly made us feel very comfortable about it being part of the hypodigm of a new taxon.

How would you compare the gait of H. naledi to modern humans?

If you were to just look at the foot, you would think that H. naledi walked in a pretty similar way to modern humans. Its foot is human-like in most respects. However, there are a couple of features in it that are not human-like. It has more curved pedal phalanges than ours, as well as features that seem to indicate a low, or perhaps even absent, longitudinal arch. So, while it would have been broadly similar to us, there would have been perhaps subtle differences in its gait. And one might argue, based on its phalanges, that a little bit of arboreal grasping might have been possible in the trees, though we would need to do a lot more work to test that. However, the rest of the skeleton indicates a combination of bipedality and some arboreality, so I think when you take everything in context and look throughout the skeleton, which you need to do, this is a creature that was largely bipedal, but not exclusively. I don’t think it’s fair to say that this was an obligate biped.

How does this new material fit into our understanding of the evolution of walking in the hominin fossil record?

First of all, it lends support to this idea of diversity in the different types of bipedalisms that we see in the hominin clade, and it implies more experimentation with this unusual form of locomotion. However, because we don’t have a date, it’s difficult to put it in a broader temporal context. If this thing was very, very late, then it indicates a lineage that’s probably a remnant side lineage that’s hanging on and retaining a little bit of arboreality. If it’s very early, it points to a different combination of features than we see in other members of basal Homo. We’ll have to wait to see what happens on that front.

Next, it’s interesting that the hand and the shoulder have some primitive retentions, although there are also some features in the hand that are more human-like. This points to a decoupling of the upper and lower limb in terms of evolutionary adaptations, with the leg being predominantly human-like and indicating bipedalism, but there being a number of retentions in the upper limb for arboreal behavior, as we do see in some other hominin taxa. It tells us that there is a new type of mosaicism, a new combination of postcranial features, in a member of relatively basal Homo. This is interesting because the idea of locomotor diversity has been used mainly to think about early hominins and this expands that idea into the genus Homo.

As a final point, one of the definitions that we have used for early Homo in the past is “full obligate bipedalism”. Looking at H. naledi and some of the work that’s been done on material from Olduvai Gorge by Chris Ruff and others and some of the other bits and pieces of evidence that are now coming in about early Homo, it does appear that full obligate bipedalism is perhaps not a criterion that we should use for defining the genus. We may have to go back and reevaluate that.

Are there any important missing bits from the H. naledi foot?

There are a couple of bones that are missing or aren’t well preserved. For instance, the navicular bone, which is one of the tarsal bones, is informative in telling us whether you have a longitudinal arch or not. Because we think this had a rather low arch or perhaps even an absent arch, it would be really, really useful to have a good navicular bone to help answer that question. We also don’t have a complete calcaneus – that would be great. And the other thing is, we don’t have toe bones, phalanges, associated with metatarsals for the whole foot, and that would be helpful to understand the nuanced length relationships between these aspects of the foot. It would be great to have a bit more juvenile material to look at growth in H. naledi, though we have a good sample to start with.

What’s puzzling for me, ultimately, is the date. That’s beyond the aegis of the team working on the foot, but I think a date would be very, very useful. Beyond that, it is a very human-like foot in most respects. I was surprised by that. One has assumptions about hominins from South Africa, and those went out the window when I saw it. I’m a little intrigued as to what an animal with a rather human-like foot in most respects was doing with such curved pedal phalanges. I’m going to have to think about that a little more, because the two alternatives are that it was actually used and it has functional significance or it is, and I know that this is a problematic issue, a primitive retention, so I think a bit more work has to be done on that.